Membership of the Friends of Bishops Park gives a vote at the Annual General meeting and will ensure that you are informed of critical matters involving the park. With the funds obtained from the small annual subscription, the executive will establish methods to publicise what is going on.

Please complete the membership form and email to the Membership Secretary with your postal address.

If possible, your email would also be appreciated as this is a much easier way of communications.

Neither your address nor any other information will be provided to any other organisation. 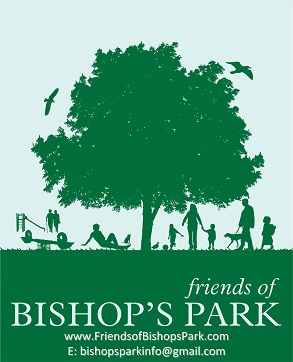 The AGM on 25th October was well attended, but numbers were lower than last year. There was lively discussion on the various issues affecting the park.

Our speaker, Colin Cooper of SWLEN spoke on the important place parks have in the general wellbeing of people and how friends groups can influence and connect with local authorities.

Chairman Amanda Lloyd Harris  stood down after 14 years at the helm; however she will still be around as one of the Councillors of the ward in which the park lies.

Melanie Healy and Rowena Vaughan were voted in as Co Chair.  All other positions remain the same.

Cllr Wesley Harcourt (Cabinet Member for Environment, Transport & Residents Services) was the keynote speaker at our recent AGM. He assured all present that while LBHF was, like other local authorities, cash-strapped, he would be doing all he could to maintain the quality of Bishops Park. Questions from the audience ranged from inevitably, the situation regarding the proposed FFC development to cyclists and lighting in the park.

“…We have been involved in consultations about the suggestion of leaving Bishops Park open at night. This got a resounding NO from all parties including the Metropolitan Police, Palace Riverside Safer Neighbourhood Panel and residents that emailed me directly. The main concern is about the potential increase in anti-social behaviour and that if the park is open 24hrs then other individuals will start congregating in the park from other areas of the borough…” Extract from Chairman’s AGM report.

This year we were very lucky to have two diverse speakers. Miranda Poliakoff, the Curator of Fulham Palace, spoke on the current exhibition entitled ‘From Bishop’s Home to People’s Palace”. It was fascinating and it is a must see exhibition for all the local community. If you have any pictures or items that might be helpful for this type of exhibition then Miranda would love to hear from you. The Museum is a marvellous local asset, so do try and visit.

Darren Preston, COO of Fulham Football Club, spoke about the clubs building development of the Riverside Stand and current works currently being undertaken. There is still one licence that has to be granted, which they feel is not a problem, so the works will be going ahead. Darren did mention, which was a suprise to some, that they are in discussions with the Council about using 50 meters of Fielders Meadow for the storage of materials and equipment to be used for the works. The Council is discussing a rental fee for this ‘temporary’ use of the park but the area will be out of use to the general public for up to 2 and a half years.

The Friends have had discussions with the Council about our thoughts on this matter. Whilst we are not happy we understand the need but would expect the Club to restore the affected area and that a substantial part of the fees be ploughed back into Bishops Parks.

Issues relating transport of equipment ect by river is still being discussed and nothing has been finalised at the time of the meeting.

Both guest speakers provided and entertaining break to the formal part of the meeting.

This is still very much an ongoing concern for the local community and the small band of people trying to negotiate with The Prince’s Trust about the future use of the site. As many locals are aware the site is covered by the same Covenant, by the Church Commissioners, that provided protection for Bishops Park over the proposed astro-turfing of Fielders Meadows some years ago. The site is designated as one that must have a garden centre or the like as well as providing a training provision for local residents. The Covenant can only be amended by The Church Commissioners and to date of writing they have not indicated a willingness to do this.

Discussions are being undertaken with appropriately experienced businesses and organisations to see how a proposal can be put forward to The Prince’s Trust as a viable concern. We are hoping that there will be a positive outcome for this historic and that it is brought back into full use.

Virginia spoke eloquently and in depth about the struggle prevent commercialisation of and encroachment on public open space; especially at Hammersmith Park. This serves as a wake-up call to residents as to what might happen to other parks nationwide. We are already seeing attempts at the same in our own Bishops Park.

Calendar of Events – dates may change without notice

Monday 7th October – 9.30am meet by the Community Rooms/cafe in the park